Punk Rock Would Be Nothing Without Robert Moog 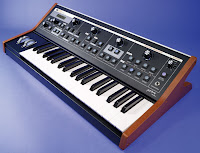 Did you know that Robert Moog was helping create new generations of synthesizers as late as 2004? He never saw the release of the MIDI capable “Little Phatty”, but he had a hand in its creation. Where would “Prog” Rock be without Robert Moog? He wasn’t the only person inventing great electronic keyboards, but he was certainly the most famous. Just ask Rick Wakeman. He would agree with me.

From Moog’s early days at the Bronx School of Science, he had a feeling that he could do more with electronic equipment than simply make machines for the engineering field. Twelve years after his last day in high school (and two college degrees later,) Moog came out with the ADSR envelope generator. That was one of the first synthesizer modules that could be controlled with the use of a keyboard.

Moog can also be credited with bringing the Theremin to the masses. He didn’t invent the instrument, but was founder of the first company to mass produce it. The Theremin has been around for 93 years. If you have ever watched an old science fiction movie, you have probably heard one in action. Some find Theremins to be very annoying, sound wise. They look very simple to play. Holding your hand within range of the loop antenna, and moving it about (your hand,) will generate a sound. It’s a one-note instrument.

Moog helped to launch the “progressive” rock movement. His modular synthesizers were put to use by artists such as Keith Emerson, John Cage and many others. Prior to the Moog, keyboard players spent most of their time playing piano, organ, and similar instruments. The band Yes would be nothing without the Minimoog. It might be a stretch, but punk rock music might not have gained a foothold if it weren’t for the Moog. As rock music had become so over the top, it inspired a generation of musicians to break down that sound. Thank you Mr. Moog for creating an instrument that inspired more than one genre of music.
Wisconsin Music Man at 9:23 AM
Share